Played on: Xbox One 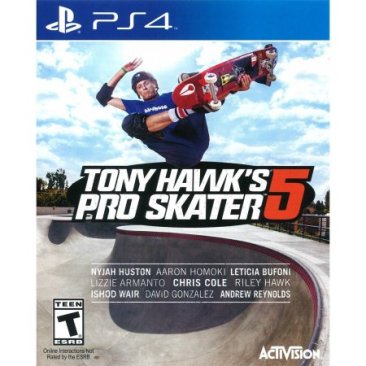 For almost a decade, the series lay dormant. Sure, there was those weird/non-functioning games that used those crappy unresponsive skateboard controllers, and THPS HD (which I hope to get my hands on, despite it being pulled everywhere) but other then that, traditional Tony Hawk was dead and gone. The only thing close was Skate 2 and 3- which of course, did very well. It seemed that Tony Hawk would not be coming back anytime soon.

Then an announcement came seemingly out of nowhere. Tony Hawk’s Pro Skater 5. That’s right- a new entry in the storied franchise was going to finally come out!

This was both a surpise and shock to most. This announcement came out of left field- noone saw it coming! Of course, as you’ll find out soon, there were red flags going up, almost immediately.

First off, it was being created by Robomodo, the guys who made the meandering Tony Hawk’s Pro Skater HD- which didn’t do well critically, with fans anyway. This made everyone instantly question the quality of the game. Then we got are first glance. Oh boy.

As you can see, it looked like a last gen game. Almost instantly, weariness set in. From the get go, we knew, deep in our hearts, that this would be the last. Then the game came out, and it was set in stone.

Robomodo didn’t kill Tony Hawk, but they put the final nail in the coffin, and lowered  the series into the grave.

Before I go over what a clusterf@#k this game is, i’ll go over the positives. Yes, these games has some positive things about it- I know, shocking, right? Make no mistake, tough- this game is still a dumpster fire!

First and foremost, I have to say that I don’t hate the levels… for the most part. There is some obvious call backs to the histories past here, including a new school level, affectionately known as School III, and yet another Warehouse-esque level. You even have a couple of downhill jam like levels as well! I honestly think that the level design and the levels them selves aren’t  really that bad- even thought a lot of them feel like rejected secret levels from past games.

The gameplay you know and love is there… kinda. As we’ll go over in the CONS section, the gameplay has a lot of problems, but the core is there… somewhere. You can grind, do grab tricks and what not- it obviously used THPS 2 and 3 as a mold- and that’s good and bad. It’s rough around the edges, like a friggin cactus, but once you figure it out, it almost resembles a TH game.

The guest skaters this time around are pretty cool- they added the mother f@#king Teenage Mutant Ninja Turtles as playable characters! You also have the guy from the King’s Quest game, the guy with the pointy green hat. Yeah, that guy. He’s in it! You can also play as Tyler the Creator and Lil Wayne, because why not? Better then what the later neversoft games offered at least…

Finally, once again, I’m glad to report that the soundtrack isn’t complete ass! It seems to be the best part of the game- once again! (Even that one song about how much some emo kids hate America. Damn emo commies!) Most of the Soundtrack is made up of people I never heard of and goes great with crappy skateboarding games, and would even be better if the soundtrack was in a better game!

Here’s a link to a playlist containing most of the songs (Trump and conservatives might want to skip the first song- fair warning!)

Well, what happened? What went wrong? I think I’m just going to quote a famous Youtuber, this quote going towards the developer, Robomodo

First off, if you bought a physical copy of the game, your screwed- the disc only comes with the first level! That’s right- they didn’t even put the whole game on the disc- the rest has to be downloaded as a huge ass patch! The most simplest thing, and the messed it up! Even worse- this means, in the future, the game can go the way of THPS HD- removed from all storefronts, and who knows- you may not be able to download the patches one day. Once again, I have to say it- this is the future we chose!

The graphics are sub-par at best. Sure, there not the worst in the world, but this does not look like a next gen game at all. Way to use the newer consoles to their full potential, Robomondo! You can really tell the game was rushed, my god….

Let’s talk about gameplay… and how Robomodo regressed the series. That’s right- there’s less features then THPS 4- let alone the newer games! No way to get off your board, no natas spin, no spine transfers- the list goes on and on. Add to this the incredibly useless slam button, and you got a Tony Hawk game that really adds nothing to the formula- it just tries to be THPS 2 and 3 and forgets everything after from existing. Way to go, guys! Way to go…

Of course, we have to talk about how just buggy and gltichy this game is! So many combos lost, because your charcter decided that wanted to fall though a ramp, or having the physics just giving up on you.

I mean just look at this s@#t!

The game feels unfinished- it shows when you “beat” it. I don’t think I remember if I even unlocked anything, or if there was a fanfare. I just completed the last set of goals and the game just kind of ended. I guess you can unlock heads and stuff, but damn. Add to this the fact that the levels are empty and free of pedestrians or anything that considered life and you got a game that feels half baked all the way though. Sure, it was nice to give the “DLC” out for free (The last few levels and characters were supposed to be paid DLC, if I’m not mistaken) but it doesn’t fix the games myriad of problems. There are no videos to unlock- a series mainstay- gone. I always hated the “soulless” criticism people give games like the New Super Mario Bros. series, but I think that it what THPS 5 exactly is. Soulless.

That’s right! Were doing this- the game was actually ported to Xbox 360 and PS3 for whatever reason! I’m not going to explain the different versions, as the game is naff no matter we you play it on!

While it’s not the worst game ever made or anything, it’s defiantly the worst Tony Hawk game ever made- barring those peripheral monstrosities, Shred and Ride. THPS 5 should only be for the morbidly curious, and if so, at a hugely discounted price (you could proably find a copy for $10). Everyone else should steer clear and go back and play some THPS 2 instead.

So we end the month of Tony Hawk games with the worst of the series. The most surprising thing about the series is how Tony Hawk himself would love a new game in the series. No, I’m not joking- He would be glad to be a part of a new game- if who ever owns rights wants to make one. God, I hate copyright laws so much. They are a necessary evil- emphasis on the evil.

I just hope that if a new game does come out, it doesn’t end up like THPS 5. A fantasy of mine is to somehow get the team back together (Neversoft) for one final hurrah, a TH game to end TH games- but I just don’t see that happening. I’m thankful for all the great games we got over the years, and honestly, I think Tony Hawk had a good run. I’ll leave the fate of the series up to him- I mean, he does have his name on the cover, after all.