The final Tony Hawk game by Neversoft. Read on to find out who killed the series, and how it happened… 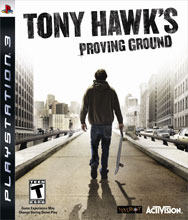 Yeah, I know it was probably not the best idea to skip Project 8, so here’s a brief overview.

It was alright, from what I remember. It was another step to a “true” open world- but in it, you can see the series start to falter even more. I don’t recall a lot from the game, other then the “Nail-the-Trick” feature being quite prominent, and again, the emphasis on the games open-world. As I said before- I’ll review Project 8 one day- but for now, I’m skipping ahead, because that’s the kind of jerk I am!

So yeah, let’s go on to the last Tony Hawk game created by Neversoft- Proving Grounds- the last traditional game in the franchise for a long while- and the last one that had any potential or anything interesting- unlike me! Let’s find out why this was the last effort, and finally find out who killed Tony Hawk. Was it Chef? Or Mr.Garrison?

First, a synopsis. Proving Ground decided to take the series in a new direction (YET AGAIN!) This time, building on the “Open World” thing Neversoft was trying to nail since THAW- with mixed results. There is now three separate campaigns, each which can be played with one character at any time you wish, and yes- some are actually better then others.

Good news, everyone! The classic TH gameplay is still here! You can ollie and grind and what not. I say this because, at this point in time (2007) a lot of game series were going though a lot of changes- and it’s good to know that the core gameplay of TH is still there (even though- well, you’ll see in the CONS section)

Mentioned above, the game now splits into three campaigns- Rigger, Career, and Hardcore. Career is your atypical skateboarding pro stuff- do tricks over gaps, in front of cameras, enter competitions, etc. Hardcore is a bit strange- I just remember doing random s@#t- but I remember it being a bit better then Career. My favorite, of course, is rigger- which lets you place things on the map at your leisure, giving way to some puzzle-esque goals where you have to use certain pieces in certain ways. Easiest the best addition to the series…. and the only game to have this feature, because, well, yeah. The series is dead…

Another big change was the addition of a skate lounge- effectively the games version of “Create-a-park”, something that was missing from Project 8. Players now have their own place to hang out with other players (though the game is pretty much dead now.) There’s a lot of cool things you can do with it, like add screens that play videos and putting in cameras that let you take pictures of tricks at precise angles. A pretty cool distraction, i’d admit.

Classic mode also makes a return- in each of the 12 areas, there’s an arcade machine, which lets you partake in classic goals, such as getting a highscore and collecting the iconic SKATE letters. It’s pretty cool, I think- defiantly adds something to the game!

Of course, the soundtrack is as good as you expect. A lot of talent here, including the Beastie Boys, Foo Fighters, Nirvana, The Rolling Stones, and a ton of others. It’s hard to find fault with the soundtrack.

Noticed how I didn’t talk about the levels (or in this case, interconnected areas)? Theres a good reason for that, and I’m just going to say it.

Proving Grounds has the worst variety of levels in the series’s history. Yes, even THPS 5 has better variety…

They’re just so boring and gray- just more proof that realism isn’t the way to go sometimes. While the level design is objectively good- you got a lot of gaps and such, just like a regular TH game- there’s just no variety. Of the twelve areas, only the Air and space museum, the subway tunnels, and maybe the bridge area stand out- every other area can be described as “Generic East Coast City, with a special appearance by a boring version of Washington DC, with a skatepark or two sprinkled in!” I’m not ragging on these areas in real life- just the versions in the game. Neversoft was usually good about this. I think part of the problem was the open world trend. Everyone wants games to be open world, no realizing this damages variety beyond repair. A good open world game is truly hard to find…

Some of the prerequisites for achieving “Sick” goals are just way too insane, even for a “veteran” player like me. For example, to get the Sick completion in Classic mode, you have to do all 10 goals… in one run. This is something speedrunners do- and yet, your supposed to do this casually. Good luck unlocking whatever it is you unlock from completing all the Sick challenges- you’ll need it!

Now to come to what killed this franchise. No, not Neversoft. Not Activision. In fact, the killer is actually a competitor.

You think you know? It’s quite obvious- it’s a game that came out the very same year, and sold gangbusters in comparison. That’s right- I’m talking about none other then the 2007 smash hit, Ninjabread Man! Oh, I mean, EA’s Skate. Yeah. Sorry about that.

Let me explain. You see, Skate came out an entire month before PG, and you can see how much PG tried it’s hardest to beat out the competition, by trying to be “realistic” instead of, you know, an arcadey TH game. As you may know, Skate was pretty much an instant hit, getting two sequels, and heavy demand for a forth. It revolutionized the way skateboarding games were played, just like Neversoft did back in 98 with THPS1. Of course, I consider a different beast- like I said, Skate was much more realistic in its approach- don’t expect to to fly off of rails and do million point combos. This is why TH died- trying to contend with competitors, instead of being it’s own thing. Activision and Neversoft were so caught up with outdoing the competition, that they forgot what made Tony Hawk, well, Tony Hawk. It was never about realism. It was always about fun. That’s why I played these games. For the love of the game, the way it played. Not for what ever PG is. I just want the old Tony back…

And thus, the traditional side of the Tony Hawk series died. Neversoft would go on to make a few (actually pretty good) Guitar Hero games, and a incredibly mediocre Call of Duty before biting the dust in 2014.

Cripes, this game has a lot of weird ports! Let’s go over them, the best I can!

Xbox 360, PS3- The premier version, of course. These have the open world intact, with all twelve areas and all the features I mentioned in the review.

Wii, PS2- The areas from the “next-gen” versions are here, but not open world- they are now in a level select menu thing. Of course, the Wii version has optional motion controls, so theres that.

DS- I have no idea, to be honest. IGN has a better score for this one then the next gen versions, so it actually might be a decent port!

The choice is clear.

It’s not the best way to end the series, but there’s at least something here. While not the worst in the series, it’s far from the best, and may be Neversoft’s weakest game. Don’t get me wrong here- it’s not terrible. It just could of have been so much better….

Join me tomorrow, where Tony Hawk comes back to life for a brief moment, only to be put back in his grave- this time, killed by a robot. Yes. That’s actually  what happened!