A game that needs no introduction, let alone another review…. but I’m going to review it anyway! Try and stop me!

It’s him, Mario! Thanks for playing his game! 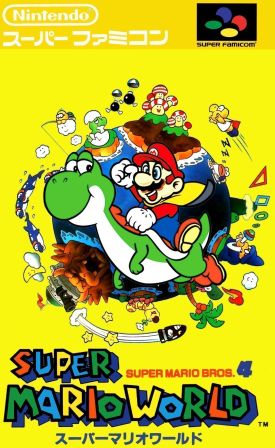 Wait, let me try that again.

Hey, I’m finally back from AGDQ. And by back from AGDQ, I mean I just sat around my computer like I usually do watching some pretty good runs while wishing I was dead.

But enough about me- were here to talk about video games- something a certain 4chan board simply refuses to do!

Today, I will cover Super Mario World. This game is-

Wait, where is everyone going?

“Everyone’s reviewed that game. It’s pretty much a masterpiece.”

“Nah. You either hate it or you love it. Most people, the latter, unless their super hardcore SMB 3 fans, but even they say it’s not bad.”

“Just put a 7 or 6 on the scale and get it over with. Everyone and their mother played their game, I-”

THAT’S IT! I HAVE HAD ENOUGH!

I KNOW HOW TO DEFEAT ALL OF YOU!

YOU HAVE FORCED MY HAND!

Suddenly, thousands of Mario fanboys drop to their knees, covering their ears, screaming. They then fall over in a fetal position and cry.

This is the last thing they whisper before subsiding into a long unending coma.

Now that I dealt with the naysayers that don’t exist, maybe I can stop wasting your time and start my review of the one of the greatest games of all time, Super Mario World!

Like I said above, Super Mario World, or SMW for short, needs no introduction.

So Super Mario World is a platformer, a game where you jump around on enemies and hit blocks and what not. It is a sequel to the equally phenomenal Super Mario Bros. 3, another game considered to be the best of all time.

The story is simple. Princess Toadstool, or Peach if your a pleb, is kidnapped by the evil Bowser, causing Anita Arkissian to cry herself to sleep on the blatant “sexism” on display. Mario gives chase to Dinosaur world, which ironically only has like 4 dinosaurs and the rest are koopas and moles and stuff. Yeah, whatever.

From the get go, you can tell your in for a great adventure, as the game immediately gives you two paths to follow- one leading up a mountain to a switch, and one leading towards a castle. Both newcomers and completionists can climb the mountain to hit the switch, making the game a bit easier. More veteran players can just jump right in and head straight for Bowser’s lair. Indeed, the map system is SMW is one of the best I have ever seen in a game, giving the player total control in their adventure while not feeling too restrictive.

The game’s world get even more complex, but not overwhelming- the game’s world is a expertly crafted web of different routes that the player can take. Those resourceful enough will find hidden exits to brand new levels, and you can even find an entire secret world full of game’s most challenging courses- but only if your good enough!

And yes, there is a good variety of levels here! You got your usual land, cave, air and sea levels, most brilliantly crafted- each level being more unique then the last. You also have a myriad of different stops, like the ghost houses, which usually present the players with a puzzling labyrinth, or fortresses, which are mini castles each with a unique challenge, ending in a boss fight with Trent Reznor, for some reason. Castles once again return, providing some of the most challenging part of the game, with a number of obstacles to boot! Can you find all 96 exits? What do you mean, no?

Of course, you have a armory of classic Mario power ups! Not only do you have the atypical mushroom, fireflower, and starman, SMW introduces the mighty cape- one of the most OP powerups of all time, letting you fly over many levels with the greatest of ease. It might be too good! You also have the P balloon. Whatever you do, do NOT such this on google images. You have been warned! Its a powerup that, for the lack of a better metaphor, blows you up like a balloon. Yes. I know. The Internet really does ruin everything…

Oh, and I can’t forget the biggest addition to the Mario canon, Yoshi! This little dinosaur guy lets you ride him around like a horse, and even lets you sacrifice him just so you can get that 1-up. He comes in many different colors, each with their own shell powers. Blue can fly around when he eats a shell, Red turns shells into fire, etc. Yoshi is a great addition that I wished was used in more Mario games. Yoshi as a mount has only appeared in, what, 3 Mario games? At least he got his only excellent adventure in SMW 2: Yoshi’s island- yet another SNES classic I’ll talk about someday.

Finally, the game is technically infinity replayable. How? Simple! Rom hacks! There have been hundreds, maybe even thousands of levels made by some pretty talented people that are actually worth playing. These range from levels trying to match the style of the NES games, to hardcore Kaizo hacks that require advanced techniques and patience to master, and beyond. Hell, there are hack that incorporate elements from other games! Thanks to rom hacking, you can play SMW FOREVER!

I could easily say something stupid like “It ends!” or if I was more of a purist “It’s not Super Mario bros. 3!” Instead, I’ll nitpick, like everyone else.

I want to say SMW is easy- too easy- but then I realized I must of played though it a thousand times- I’ve pretty much mastered the game, and might even attempt an actual speedrun of it one day. However, if take in account things like the special world levels, then SMW may not be the cakewalk I think it is.

I guess I could complain about how the bosses are recycled here- Bowser,Ludwig, and Big Boo being the only three really unique bosses. The rest are the same 3 fights with a slight difficulty upgrade. I’m just gonna say it here- most boss fights in the Mario games aren’t that great. Too much repetition, and “hit the same spot three times” bosses throughout the series…

Also, like I hinted at above, the cape is pretty broken. Any player can simply fly over a good chunk of the levels, beating the game with ease. Take my advice, and only use the feather powerup when your stuck in a rut- the game is much more enjoyable on the ground.

What can I really say? SMW is such a well designed game, so much so that I can easily pop it in any day and have some fun with it, whether it being a causal speedrun, or once again to 100% completion, SMW is one of those games you not only need in your collection, it’s one that pretty much mandatory at this point. It has some problems, but their not too glaring.

If your somehow on the fence, then take my advice and play it. NOW. That’s right, drop what your doing, and play it NOW! The game is available in all sorts of places, and for whatever reason, the original SNES cartridge are going up in price- despite, you know, being one of the best selling games of all time, and being widely available. Thanks, collectors! It’s also on the SNES classic… if you can find one. There’s also a GBA port that really isn’t as bad as everyone says.

So yeah- play it, you dummy!