Reiko Nagase is about to make you her b@#%h.

One of the first games released for the Xbox 360, you’d be surprised on how well Ridge Racer 6 holds up. (At least if your into arcade racing games like me, that is) For those who don’t know what Ridge Racer is, it was pretty much a meme to sell PSP’s. Heres a video showing the complete history of Ridge Racer in all it’s glory! Please watch before reading the rest of this review!

Now that you know the colorful history of this racing franchise, we can begin!

Real talk: Ridge Racer is a series of racing games that started in the arcades, and were ported to the Playstation. Most people consider R4 to be the best in series, just so you have a gauge on what were working with here. The series claim to fame is that you can drift around corners going about 23564 mph, the same speed I drift though life as I DRIFT AND DIEEEEEEEE.

Remember Puddle of Mudd? I digress.

So, you have a bunch of cars, each with different ways they handle. You got a standard, which behaves like a normal car in most RR games. Then you got Mid, which acts more like a normal car. Finally you have Dynamic, which is uncontrollable piece of s@#t. There are 4 classes of cars, each getting faster and faster with each class. There is also special vehicles, but since the post-game is impossible, there is no point in talking about them. Each cars have references to various Namco arcade games, which is pretty cool. You also can play Pac-Man in the loading screen- a tradition in every RR to date (except for RR Unbound, that piece of crap)- playing, and even unlocking said classic Namco arcade game.

There are 15 tracks, which can be raced in reverse. All of them are pretty well laid out, and you will get very used to them in world Xplorer (no really, that’s what its called!) mode, which makes you race them over and over and over and over…

The game, unlike me, actually holds up well graphically. Oh god, it rhymes! Why!

The cars handle well, except dynamic and special vehicles. The game also looks good- sometimes it’s hard to believe that this game was a launch title for the Xbox 360. Granted, RR 7 looks better (and is essentially the same game with some new tracks and vehicles) but for it’s time, RR 6 looks good. There is also a lot to unlock, and I like the way you do so. You see, world Xplorer is pretty much one big grid of hexagons- complete all the races around the prize, and you win it! The stuff you unlock is mostly cars, but you’ll also unlock things like the Pac-Man arcade game, and Heihachi from Tekken as an announcer. It’s a kind of a meta-game, seeing how much of the grid you can fill up, and how much stuff you can unlock. . That is, before you come to a horrifying conclusion. 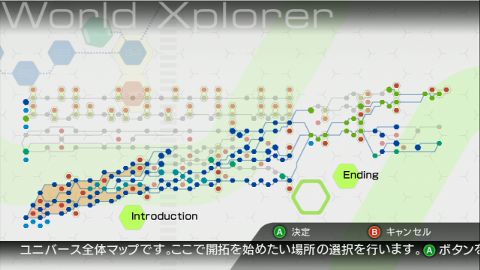 Some stupid designer is laughing at the thought that you will never unlock the post-game content.

Every race leading to the “ending” is really not that difficult. There is a lot of post game content, but guess what? Apparently, who was ever in charge of RR6 thought it would be funny if he/she made the post-game impossible to beat. Not joking, it’s impossible. No, it’s not some error… (or is it?) The ai in the expert and advanced racers are IMPOSSIBLE to beat compared to the tame difficultly the game dishes out beforehand. It is such a large and unsurmountable spike in difficulty, that most people, myself included, may never unlock the pac-man car. Or the hovercraft. 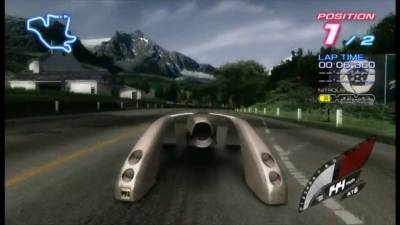 Or whatever in the hell this is

I just don’t understand the reason behind such difficulty. No matter how hard I tried, I never even got close to beating any of the special vehicles. I just can’t come to terms with the difficulty of the post-game. It’s something that has to be experienced to be believed. 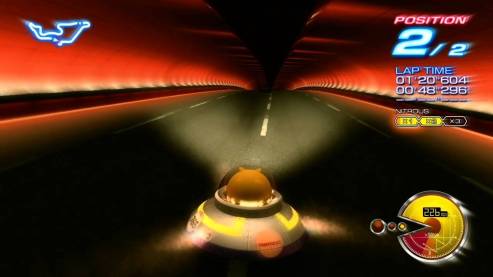 Pac-Man is an unlockable car. Too bad you’ll never unlock him.

Doesn’t matter anyway – the dynamic and special machines are pretty much uncontrollable. You try to drift, only to hit the wall every single time, as the vehicle spins out of control. Thanks Obama! Or Trump. I don’t know, I don’t watch SNL anymore.

Also, the default announcer is annoying as hell. “HA HA TIME FOR A HEATED RACE AT AIRLINE PARK! YOU NERVOUS? I’M SO EXCITED!” Actually, I have a love-hate relationship with this guy, I just wish he would keep his mouth shut when things are getting rough.

Even though my CONS section of the review is longer then the PROS section, Ridge Racer 6 isn’t a bad game. I just can’t accept why the post game is so hard. Why do I feel that I have to be an expert player just to unlock Pac-Man in a flying saucer? Why do I try so many times just to fail? If you play this just unlock the default ending, your gonna have an alright time, but trying to 100% this game is going to be a painfully difficult experience that may not be worth it.